TransPlant: My Disease is an Artistic Creation 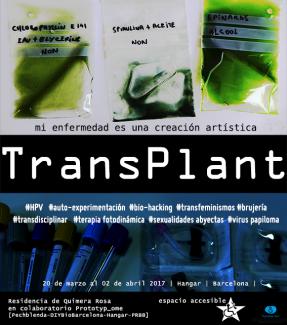 TransPlant: Green is the New Red is a transdisciplinary project of plant / human / animal / machine hybridisation started by Quimera Rosa in 2016. It is both a bio-art project based on a human hybridisation / plant as well as a human trans-identity process > plant. The development of this project is based on the interaction between different axes that, through different bio-hacking practices, try to produce changes of subjectivity and deconstruct narratives that present the body as a single unit.

For the research residence at Hangar Quimera Rosa develops TransPlant: My Disease is an Artistic Creation: the part of the project about medical self-experimentation on condylomata acuminata, a STI produced by HPV (Human Papilloma Virus) which also affects one of the members of QR. This part of the project will be based on the elaboration of protocols and tools needed for the use of photodynamic therapy (PDT) to treat DIY / DIWO condylomas. PDT is not a very invasive technique with great results on localised cancers and skin diseases, based on the application of a photosynthesis process in human body. Being a recent technique it is still difficult to access to it, when its community use could be easily applied in external cases such as condyloma.

So, the main objective for this part of the project is to open the black box, as hackers say, or to open the pill, as the activists affected by AIDS say. The project is about replicating and making knowledge accessible on a wiki, which could be useful for community health centers, for people who are excluded from the public health system, but also for health centers in countries in the south where HPV is even more expanded. On the other hand, from the artistic side and through the performative dimension of self-experimentation, we want to locally generate a critical mass of users / experts (understanding users as experts).