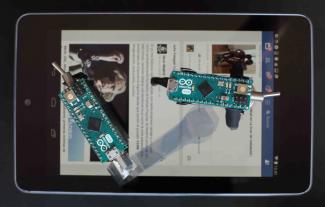 Project that explores issues related with interface politics creating an adversarial relationship between a physical and a graphic interface. Interfight fosters a context where interfaces from artificial life fight with each other. Under a dysfunctional aesthetic, Interfight is a physical and kinetic interface. It works using the human body like an input, through a conductor material, and interacts with graphic interfaces in capacitive surfaces as also in tactile screens. The contact between both interfaces causes a physical reaction (gravity, friction, vibration). The graphic interface is an Android app which is developed by duplicating the Android’s GUI. The desktop icons induce animal behaviour triggering aggressive reactions against the physical interface.