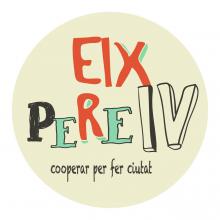 Eix Pere IV is a citizen’s initiative lead by a group of neighbours participating in the so called Taula Eix Pere IV.

Their objective is to impulse new civic, cultural and economical activities along the street Pere IV and its surroundings, to create a higher social cohesion at the territory. It aims to involve the neighbours in the activities, make them participate in the debate about the urban fragmentation of the neighbourhood and act impacting positively in the territory.