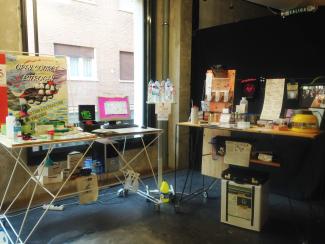 A collaborative, interdisciplinary research project, Open Source Estrogen combines biohacking and speculative design to demonstrate the entrenched ways in which estrogen is a biomolecule with institutional biopower. It is a form of biotechnical civil disobedience, seeking to subvert dominant biopolitical agents of hormonal management, knowledge production, and anthropogenic toxicity. The project begins with a speculative question: what if it was possible to make estrogen in the kitchen? From this seed arises more fundamental questions about who is producing hormones, whose bodies are affected, and how environmental hormones exist already as a state of toxicity. While issues of body and gender sovereignty are deeply at stake, endocrine disruptors termed ‘xenoestrogens’ pervade our environments due to petrochemical agro-industrial and pharmaceutical forces. These xeno-molecules change the morphology of our bodies and bodies of non-human species, evidencing a malleability inherent to nature but alien to our prescribed notions of (eco)heteronormalcy. In response to the “molecular queering” performed by estrogen, facilitated by dominant hegemonic forces, the project initiates a public dialogue through DIY/DIWO (do-it-yourself/do-it-with-others) biohacking and artistic intervention. Using speculative design, iterative workshopping, and kitchen performance, Open Source Estrogen employs these tactics to create new subjectivities for living in an increasingly queer world. From capitalist xeno-forces arise xeno-solidarities, capable of collectively hacking the systems of hormonal colonization.