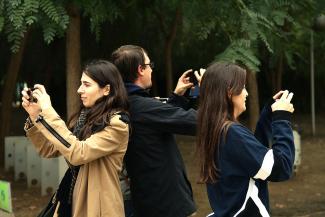 Collaborative documentary and online archive on urban renewal in the Poblenou district.

Constelaciones Poblenou is a documentary aiming for confluencing spaces among traditional neighbours, migrants and new local agents during transformation and gentrification processes. It highlights multiple perspectives about the physical, social and political changes of the urban space. It offers an online device to implement a collaborative registry of urban renewal. The online device allows neighbours to keep record of their local spaces and routes with the objective of earning back public spaces in favour of the commons.

The documentarians can communicate through a local social network, share online contents, design routes, or meet in a physical point of documental digitalisation in  the neighbourhood. Informational layers, confluencies or agents meetings, accidental or planned, are shown on a map which contains all the files.