The Mirror of Faith 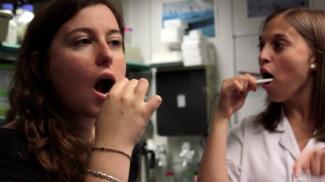 Bio-art project reflecting critically about the media representation of science and religion.

In 2004, when it was announced the God’s gene (VMAT2), Boryana Rossa wanted to create a literal illustration of the controversial way Hamer’s theory was being illustrated by the media. To this end she decided to genetically modify two main life basis organisms, bacteria and yeast.  Associating the God gene (science) with the highest levels of spirituality and faith (religion), Boryana Rossa attempts to put on the table controversial perspectives and promote the discussion and critical thinking. This “absurd scenery” is a reformulation of the notion of “genetically predisposed faith”, but also a reformulation of  the controversies about how “faith” or “beliefs” are represented by the media.

During her residency in Hangar, Boryana Rossa has worked with Dr. Michael Edel at the installations of the Pluripotency Lab at the University of Barcelona. In this context, the artist and the scientists collected samples from different populations groups with different religious beliefs. Using these samples they codified the genes to check if the gene presence is related with the spiritual level.